To illustrate the magnitude of the issues that Mind Medicine Australia aims to help address, we present some basic numbers relevant to mental illness in Australia, and globally. Mental illness refers to clinically diagnosable psychological, emotional, or behavioural ‘disorders’, for example, depression, anxiety, substance use, and post-traumatic stress disorder. These disorders can vary in severity and duration, and often have damaging effects not only on the afflicted individual, but on their families and peers, with far-reaching consequences for society as a whole.

An estimated 15% of the world’s population (a staggering 1.1 billion people) had a mental illness in 2016[i]. Currently, over 300 million people suffer with depressive disorder, equivalent to 4.4% of the world’s population[ii]. Regions with the highest rates of mental illness globally include Australia, North America, and Western Europe (see Figure 1). A number of explanations for this pattern have been put forward (for example, see Whitaker[iii])

Across all diseases, five types of mental illness appeared in the top 20 causes of global disease burden in 2013 (which takes into account both death and disability)[iv]. Globally, mental illness has been estimated to account for over 7% (ranked 5th) of the global disease burden, though some argue this is a gross underestimation[v]. Depression is ranked by WHO as the single largest contributor to non-fatal global disability (7.5% of all years lived with disability in 2015); anxiety disorders are ranked 6th (3.4%)[ii].

Share of population with mental health and substance use disorders, 2016 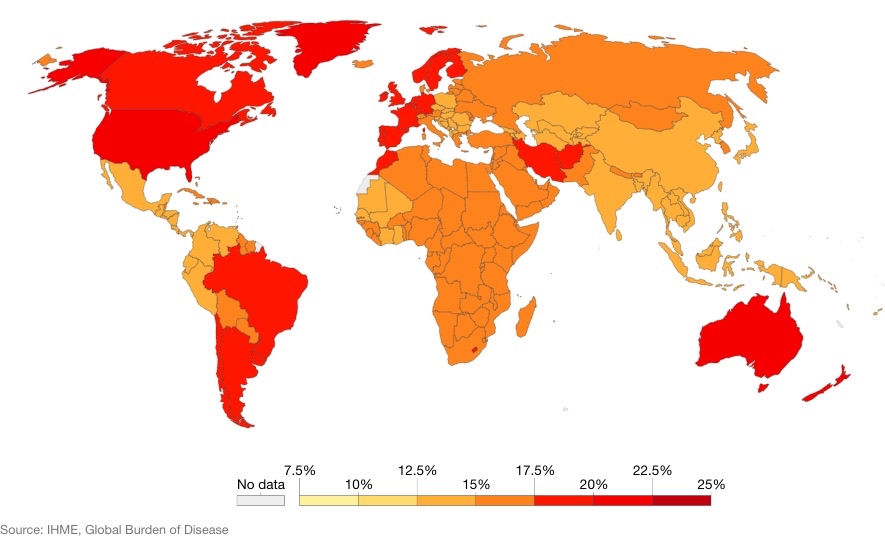 FIGURE 1: Share of population with any mental health or substance use disorder; this includes depression, anxiety, bipolar, eating disorders, alcohol or drug use disorders, and schizophrenia. Due to the widespread under-diagnosis, these estimates use a combination of sources, including medical and national records, epidemiological data, survey data, and meta-regression models. Hannah Ritchie and Max Roser (2019) – “Mental Health”. Published online at OurWorldInData.org. Retrieved from: ‘https://ourworldindata.org/mental-health’

In 2017-18, one in five (4.8 million) Australians aged 16 to 85 had a current and chronic mental health or behavioural condition[vi]. This number has been steadily increasing, up nearly 3% from the 2014-15 National Health Survey. At least 45%[vii] of Australians will experience a mental illness in their lifetime[viii].

The most common mental illnesses in Australia are depression, anxiety, and substance use disorders (often occurring together). In a single year, 13% of Australians will be diagnosed with an anxiety-related condition (e.g., post-traumatic stress disorder, social phobia), 10% with a depression-related condition[vi], and over 5% of Australian adults generally[ix], and 13% of people aged 16-24, will be diagnosed with a substance use disorder[x]. Diagnoses aside, in 2017-18, 13% (2.4 million) of Australians reported high or very high levels of psychosocial distress over the past 4 weeks alone[vi].

An estimated 200 Australians attempt to take their life each day[xii], and the suicide rate in Australia has been steadily on the rise over the past decade. Suicide is the 13th leading cause of death – over 3,000 Australians take their life each year, or 8-9 people each day[xiii]. The more prevalent causes of death are attributable to factors largely associated with old age, with median ages of death for these causes typically in the 80s – the median age for suicide is 45 years. Mood disorders (including depression and anxiety) are the leading cause of suicide, accounting for 43% of Australian suicides in 2017-18[xiii]. 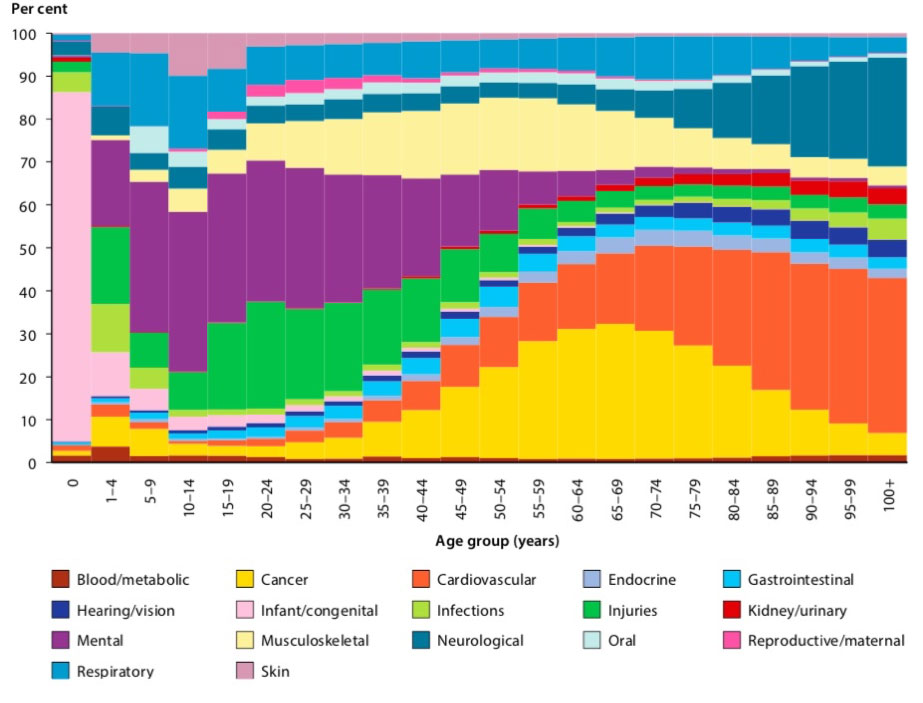 In 2017-18, Australians aged 15-64 with a mental or behavioural illness were nearly twice as likely to be unemployed or not in the labour force (37.8%) than those without such an illness (20.5%). A 2013 report commissioned by Medibank and Nous Group found the overall cost of supporting people with a mental illness to be at least $28.6 billion annually, far exceeding previous estimates that failed to consider numerous non-health expenses (e.g., income support, housing, criminal justice)[xiv]. This estimate, which does not include indirect costs such as lost productivity, amounts to 2.2% of Australia’s Gross Domestic Product (see Figure 3).

FIGURE 3: Direct health-related and direct non-health-related expenditure on mental illness in Australia, 2013. Medibank Private Limited and Nous Group. (2013). The Case for Mental Health Reform in Australia: A Review of Expenditure and System Design.

Under 50% of Australians with a mental illness will access mental health services in a given 12-month period[xv]. For those who do, outcomes are typically far from satisfactory. In spite of a vast global effort to understand and treat mental illness – notwithstanding the development of a few treatments that have helped a minority of sufferers in a sustainable way – the effectiveness of treatment remains inadequate. For example, only 40 to 60% of depressed individuals respond to current chemical or talk therapies[xvi], with the majority experiencing ongoing symptoms that fall below diagnostic thresholds, and between 50% and 80% relapse when treatment stops[xvii,xviii,xxi,xx]. In addition, psychotherapy is often associated with high economic costs, and chemical therapies are usually associated with considerable side-effects.

In this context of high prevalence, debilitating cost to human life and society, and inadequate treatment outcomes following decades of global research, new approaches are urgently needed. Psychedelic-assisted psychotherapies are poised to usher in a new era in mental health treatment. 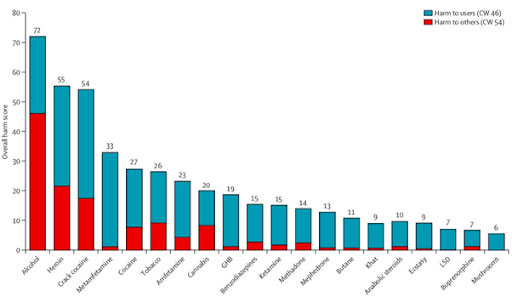 For a list of some current and past research in this space we suggest our knowledge page and this list of research from The Multidisciplinary Association for Psychedelic Studies (MAPS).