Science not Stigma: Safety of Psychedelic-Assisted Therapy for Mental Illness by Victor Chiruta

The conversation of psychedelic-assisted psychotherapy has moved from the scientific community into the mainstream. In Australia, the two psychedelic compounds that have been proposed for rescheduling as controlled medicines are psilocybin (a compound from magic mushrooms) and MDMA (an ingredient sometimes present in ecstasy). Recent media coverage has raised the issue, that some believe there isn’t enough evidence in safety for the medical use of these compounds. This article will point to a number of respected peer-reviewed scientific journals giving evidence and confirming that both psilocybin and MDMA are safe if used in a medically controlled environment. The first compound we will examine is psilocybin.

The scientific journal Addictions reports the toxicity of psilocybin and magic mushrooms to be very low[1]. The lethal dose of psilocybin is extrapolated to 6g in humans. This is 300x the typical therapeutic dose of 20mg. Let’s just imagine consuming 300x your usual cup of coffee, dose of Panadol, pint of beer, or even your daily multi-vitamin! The Japanese Journal of Legal Medicine and the Proceedings of the Western Pharmacology Society have published that fatal intoxication due to ingestion of magic mushrooms is extremely rare[2][3]. A review on the harm potential of psilocybin-containing magic mushrooms published in the scientific journal Regulatory Toxicology and Pharmacology, found only two deaths due to direct overdosing internationally since 1960[4]. For comparison, the Australian Bureau of Statistics (ABS) reported 276 deaths from antidepressants and 663 deaths from anti-anxiety medication during 2016 in Australia alone[5]. The lethal toxicity of fresh psilocybin-containing magic mushrooms in humans is 17kg[4]. It would be highly unusual and very challenging to consume 17kg of mushrooms.

“…normally people do not die from a magic mushroom overdose, because they are not very toxic and the potential victim will spontaneously vomit keeping the final dose low.”
– Dr. Jan van Amsterdam, Addiction Specialist

The scientific journal Addiction Biology, reports that there is no evidence of physical dependence with psilocybin administration[6]. Further to this, The American Journal of Drug and Alcohol Abuse concludes that available evidence indicates psilocybin is non-addictive[7]. Moreover, psilocybin profoundly facilitates remission from addiction in people with alcohol and tobacco dependency. Psilocybin is currently in clinical trials for treating cocaine and opioid addictions[8][9]. If used within a controlled setting, psilocybin has little to no adverse reactions[10]. Early therapeutic use of the pharmaceutical psilocybin, Indocybin® developed by Sandoz, was without complication[6]. In more recent trials, there have been no significant adverse events with psilocybin use[11].

The Journal of Psychopharmacology conducted a population study across a cohort of 135,000 and found no link between psychedelic use and psychosis[12]. The researchers found that, individuals who had taken psychedelics were not at increased risk of developing mental health problems, including schizophrenia, psychosis, depression, anxiety disorders, and suicide attempts. A scientific committee on drugs in the UK concluded that, psilocybin-containing magic mushrooms are amongst the least harmful psychotropic drug to the user and those around them[13].

Current controlled medicines buprenorphine, methadone, fentanyl, cannabis, ketamine, amphetamine; prescription medicines anabolic steroids, benzodiazepines; and unscheduled drugs tobacco and alcohol, all ranked as causing more harm to the user and more harm to others when compared to psilocybin-containing magic mushrooms. This research was recently repeated with similar results in Australia by a panel of 25 experts including psychiatrists, police, addiction specialists, doctors, and child protection workers[14]. 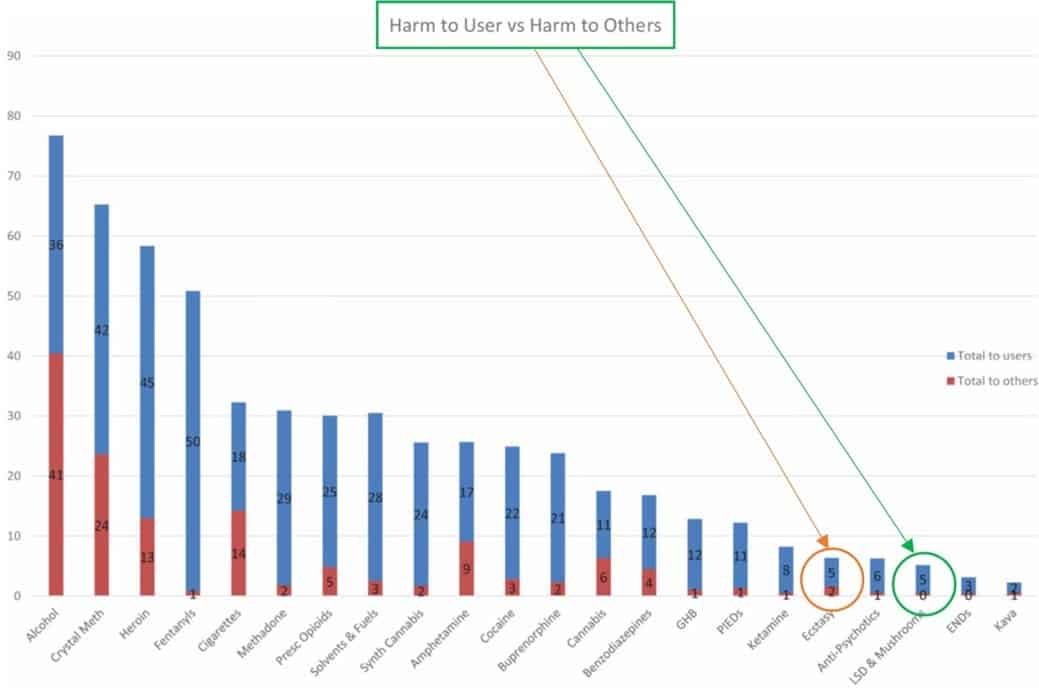 Figure 1. Circled in green the category ranking the harm of psilocybin-containing magic mushrooms in comparison to other medicines and illicit drugs within Australia in 2019[14]. Circled in orange the ranking of harm of the category containing MDMA.

MDMA may have a reputation by being associated with the overdoses and deaths in relation to ecstasy pills at dance parties. In assessing the safety of MDMA, important distinctions need to be made between medicinal MDMA and the street-drug ecstasy:

Medicinal MDMA is administered in a medically-controlled clinical setting. It is pharmaceutical grade, dosage is known, patients are properly screened, the use of the medicine is regulated, and the medicine is administered only by trained health professionals. Understanding the distinction between the two types of drugs is fundamental when examining the evidence of MDMA for safety.

MDMA was first synthesised in 1912 by Merck[15]. Although it wasn’t until 1977 when MDMA began its use in psychotherapy when the safety of this compound was first studied. We have over 40 years of data to evaluate the toxicology and safety of medicinal MDMA in a therapeutic environment. The lethal dose of MDMA in humans is 10-20mg/kg[16]. The largest dose used in clinical studies is 1- 2mg/kg[17]. The lethal dose for MDMA is 10x greater than the therapeutic dose. Early therapeutic use of MDMA in psychotherapy was without complication[15]. The Multidisciplinary Association for Psychedelic Studies (MAPS) have evaluated all 1,837 participants involved in recent controlled clinical MDMA studies[18]. MAPS has published that no unexpected serious adverse reactions were reported.

All serious adverse effects have been rare and non-life threatening. The Canadian Medical Association Journal have published, that MDMA administered therapeutically in a controlled environment does not produce dependence[19]. Therapeutic treatment with MDMA has not been shown to increase illicit drug use[18]. Morbidity and mortality of MDMA use has only occurred in uncontrolled non-clinical settings[20]. The International Journal of Drug Policy has published that in Australia between the years 2000 to 2018, 14 deaths have occurred due to MDMA toxicity only[21]. In comparison, the ABS reports 170 deaths due to paracetamol just in the year 2016[5]. In Figure 1, we see that MDMA is evaluated by Australian experts to cause less harm to the user and harm to others than the same medicines and illicit drugs as psilocybin.

There is no scientific or medical evidence to suggest that psilocybin nor MDMA when administered in a controlled clinical setting is linked to either mental illness or negative health outcomes. On the contrary, MDMA and psilocybin have been shown to be safe, non-toxic, and non-addictive when administered in a medically-controlled clinical environment. It is justifiable and evident why the Food and Drugs Administration (FDA) has granted both MDMA and psilocybin breakthrough medicine status in the US. The FDA has opened an ‘expanded access scheme’ for treating Post-Traumatic Stress Disorder (PTSD) with MDMA, the Israeli Ministry of Health has embraced the treatment of PTSD with MDMA under ‘compassionate use’, and compassionate MDMA therapy has been conducted in Switzerland. With the remarkable results of these psychedelic medicines, it would be detrimental for suffering Australians not to have medically supervised access to these breakthrough treatments.